Chloe Temple and her stepsister Kyler Quinn are fully committed to becoming Internet stars through their new cooking show. They’ve decided to only wear aprons with a bra and panties apiece beneath them since that will give their show a sexy edge. They also decide to ask Chloe’s step-cousin Seth Gamble to help them with filming. Chloe’s mom, Edyn Blair, overhears the girls on the phone with Seth and tells them she doesn’t want them anywhere near that bad influence. The girls say they’ll call Seth back and cancel, but it’s a lie since Edyn has to go to work.

When Seth arrives, the girls greet him with an admonishment that he should take his shirt off, too, because things are going to get messy. Seth responds by stripping down to his boxers, which prompts the girls to playfully throw flour at him which does, indeed, make things messy. As they’re playing around, the girls can easily see that Seth has a boner. They can take care of that problem! Dropping to their knees, Chloe and Kyler pull Seth’s hard dick out and start sucking him off. Knowing that no filming is going to get done while they are all so horny for each other, the trio relocates to the bedroom for a good time! 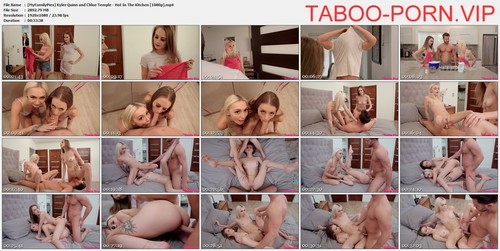