Rachel fell into a bad depression after her husband passed away. In her grief she seemed to forget that he had been a bastard who treated her very badly. For weeks she did nothing but lay in her bed and drink until her step-son loving Dylan helped her get back on her feet. Then came a period where Rachel went out almost every night, drinking hard, flirting with men at clubs. On one occasion she stumbled home and found Dylan waiting up for her. When he appeared to disapprove of her behaviour, she playfully taunted him by assuming provocative poses that showed off her swelling bustline, deep cleavage and shapely butt. She then planted a more-than-step-mother kiss on his lips before going to bed. Little did she know how much passion her antics sparked in Dylan. He had always wanted to be a better man to his step-mother than his step-father had been. Now he wanted to be her lover as well. While she lay resting on her bed, he entered her room to see how she was doing. Rachel’s dress had hiked all the way up to her thighs, and her aroused step-son could not resist touching them – all the way up to her butt. He then covered her with a blanket, kissed her cheek, and left. The next day Rachel encountered Dylan in the kitchen. She seemed bright and happy, but when she poured a drink and tried to take a pill, Dylan stopped her. He was clearly concerned that such habits were not helping his step-mother. As Rachel was hysterically protesting his intervention, he took her into her arms, hugged her tight, and told her he loved her. The next thing she knew, they were kissing passionately. Even as Rachel hesitated with guilt, he step-son lifted her on to the counter, running his hands up her thighs and over her breasts. The sensation felt so good that a taboo desire for her step-son suddenly took over. It had been a long time she’d been truly loved by a man. Now Dylan was giving her what she needed. Her recent grief seemed to evaporate in the pleasure of the moment. Later, in her room, the forbidden fun began in earnest. Stripped down to her lingerie, Rachel lay kissing and fondling with her step-son in the marital bed. After the young man had played with her naked breasts and suckled the nipples, he dropped lower and licked her pussy. In her arousal, Rachel moved to straddle his face. Panting, she ground herself down on his mouth, trying to get his tongue as deep into her as possible. She then returned the favor by giving his big hard cock a deep and loving sucking. Finally, the pair fucked up a storm in the doggy and missionary positions. Possessed with ecstasy, Rachel begged her step-son to cum inside of her. He did, heavily. Afterwards, she held him in her arms. In just a few hours he had brought her back to life, made a new woman of her. She looked to the future now. With him as her special man, she might even start family. It was certainly possible now that he had shot so much potent cum into her fertile, unprotected pussy. 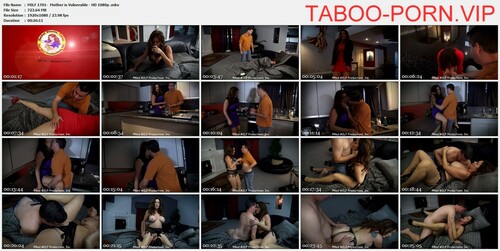