A red sports car pulls into the drive of a sprawling estate. As it parks, the driver’s window rolls down to reveal a beautiful woman. The woman, Charity, (India Summer) has recently become engaged to a businessman and is moving in with him. Her daughter, Jessica, (Whitney Wright) steps out of the car and looks around the courtyard in disbelief. Her mother had said their new place was big … but not this big! It was easily ten times bigger than the crappy apartment they had back in the city — and the amount of nature and green space surrounding them was incredible. Finally, after years of struggling and living below the poverty line, the 18-year-old girl and her mother could relax. You can see the weight lifting off Jessica as she looks back to her mother. Charity steps out of her shiny new car, soaking in the view and sighing, before the two women embrace and decide to wait inside for the moving trucks. They pass through a garden gate and approach the front door.

Eying the flowers, Jessica asks when Charity’s fiancé will be home. She explains that the man works overseas and is often away, so the beauty of the relationship is the amount of quality mother / daughter time the two women will finally have. He has a son (Robby Echo) who sometimes stays on the property, to do the gardening, but that’s about it. The rest of the place is theirs to enjoy. There is an awkward pause as the two women look around, each clearly consumed by thought. Jessica takes her mother’s hand and quietly asks ‘…You promise that we are really leaving the old life behind, right mom? You aren’t going to be tempted back for any reason?’ Charity drops her daughter’s hand and sternly pulls her close, snapping at her. ‘I told you not to talk about that here, Jessica.’ She says, dropping her voice. ‘The past is the past. Of course, I’m not going to do that anymore.’ Jessica jumps back and quickly apologizes. Charity storms off into the house, leaving the daughter looking anxious before following her mother. The camera hangs on the empty courtyard for a moment before the man’s son, Eric, slowly steps into the frame from behind the gate. He has been listening. 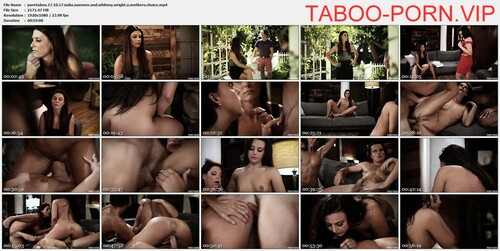