Riley and her husband have been married for a short time. However, the honeymoon is about to take a drastic turn. Riley is disappointed that her husband cannot secure a promotion. She is accustomed to the finer things in life and he isn’t providing them. Riley warns her husband that if he doesn’t come home with a promotion that she is taking matters into her own hands. Her husband is about to find out how far Riley will go to get what she wants. When he comes home Riley removes his belt and puts it around his neck. She drags her shocked husband into the bedroom where he sees his boss lying on his bed with a raging hard on. Riley explains that she now has his job… and a promotion… and will be earning twice salary that he did. Riley’s husband will be the one staying at home and doing laundry. Riley fucks her husband’s boss right in front of him. Then she demands that he join in. Her humiliated husband is made to lick her clit as she cums. Then Riley makes him suck her boss’s cock and lick both of their asses. Riley is high on the power of forcing her husband into submission. As the days pass she locks him into chastity, dresses him like a sissy maid turns him into a foot whore, teaches him how to give blow jobs and never ceases to humiliate him. When her husband protests she asks him if he wants a divorce. She knows that her pathetic husband will agree to stay in her life any way he can. When Riley shows her subby hubby his new bed… a cage at the foot of her bed… he looks down at his chastity device and the key she has taken to wearing on her ankle bracelet, “Will I ever be able to cum again?” He asks. Riley laughs as she locks him in his cage and prepares to leave for her date, “Don’t ask silly questions.” 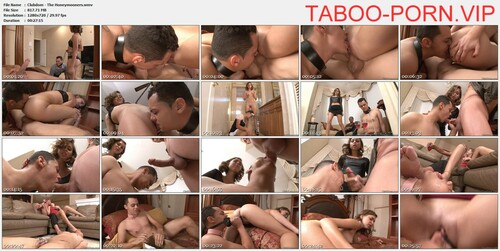